External abrasion
In principle, all type of contact with the rope will lead to some form of abrasion. The severity will depend on the type of rope in question and what the rope comes in contact with.
The following outlines some examples of what may cause abrasion:
• The type and design of fairleads affects the amount of abrasion mooring lines are exposed to.
• Closed fairleads should have a D/d of at least 15.
• Roller fairleads will usually have lower D/d ratios, but roller performance must be considered.
• Rollers that do not rotate result in significantly increased rope abrasion.
• As superyachts often exhibit very small D/d ratios in line with the equipment number, special attention needs to be paid in this respect.
• Slippage and other movement when on bollards.
• Avoid all type of movement on bollards as much as possible.
• Owing to the low friction coefficient of HMPE ropes, they should always be deployed with a cover in the bollard area.
• The potential for severe abrasion exists directly behind the eyes of mooring lines, as the rope is pulled over the edge of the quay when mooring and unmooring. 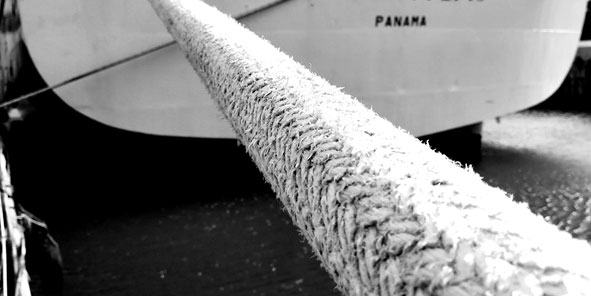 Internal abrasion
Internal abrasion is caused by the scissor motion of yarns or other material rubbing within the rope structure. This predominantly occurs when the rope is bent, particularly when under load. Dirt or other abrasive particles that enter the rope can also cause internal abrasion. Care should therefore be taken to avoid the rope coming into contact with such particles.

Shock loads:
When the load on the mooring lines increases very swiftly. If the working load of the rope increases by more than 10% within a very short timeframe, this is referred to as a shock load.
To protect the mooring line against potential damage, care should be taken to ensure that the dynamic load does not exceed 50% of the LDBF (Line Design Break Force).
Excessive shock loads can have serious consequences leading to a reduced breaking load and the risk of tearing in subsequent applications. Shock loads can cause:
• Fusing of rope fibres
• Rope becoming stiffer/less flexible

Play it safe!
Any rope that exhibits recognizable effects of being subjected to excessive shock loads should be retired immediately! 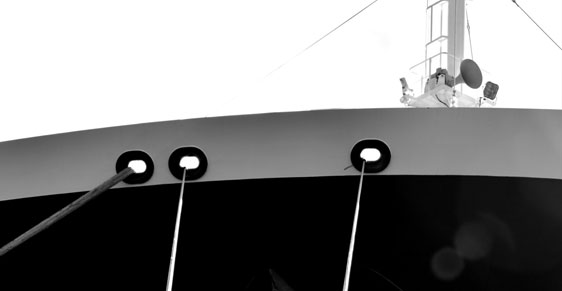 Sharp deflections
If a mooring line is bent, such as on a roller/sheave, the bending action means there is a loss in strength. HMPE ropes are affected more in this respect by the effect of bending than HT ropes.
The effect is measured by the D/d ratio:
D = the diameter of the roller/sheave
d = the rope’s diameter (d).
As the D/d ratio decreases, the greater is the negative effect that the bending has on the rope’s strength.
Be aware that sharp deflections also lead to greater pressures being subjected to bollard, fairleads, etc.
For HM mooring lines, a D/d ratio of at least 15 should be applied, in accordance with OCIMF MEG4. 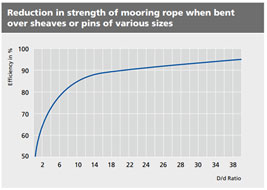 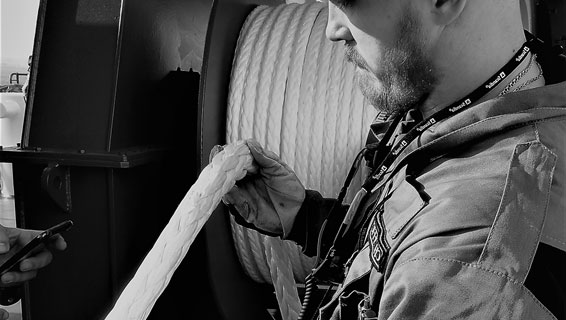 Heat
Heat is a natural enemy of synthetic fibre ropes. Among the main causes of heat is friction, such as when ropes are used in closed hawses. This can lead to:
• Internal rope fusing
• Rapid wear
• Degradation
Exposure to high temperatures over extended periods can also lead to a reduction in the break load – without any visible sign.
To avoid damage, mooring lines should not be exposed to any external sources of heat or hot surfaces, such as:
• Exhaust funnels/pipes/systems
• Naked lights
• Anything causing friction
As different materials used in the construction of mooring lines will have varying levels of susceptibility to heat-induced damaged, please refer to the technical specifications for the fibres used in the rope types in question.
Please also refer to the appendix for examples of the effects of heat on synthetic rope and criteria for discarding damaged mooring lines.

Twisting / torsion
Prevent the twisting of mooring lines. Any twists should be eliminated prior to use. Longitudinal markings on the rope allow any twist to be identified quickly and easily. Moreover, twisting reduces the break load!
As a rule of thumb: Only four turns per meter cuts the break load by 10–30%.

Knots
Always bear in mind that knots reduce the strength of ropes. If the application does not explicitly require a knot, none should be used. If unavoidable, the working load must be reduced accordingly, to ensure safety.
Depending on the type of rope and knot used, a single knot can reduce the rope’s breaking load by approx. 40–80%! 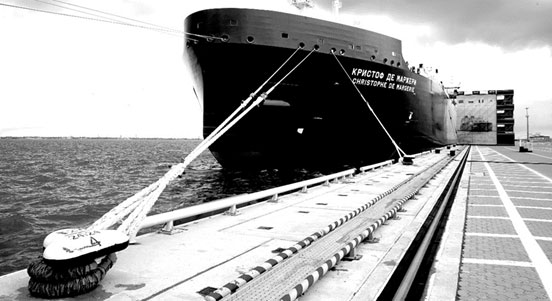 This site uses cookies. By continuing to browse you are agreeing to our use of cookies. Find out more.